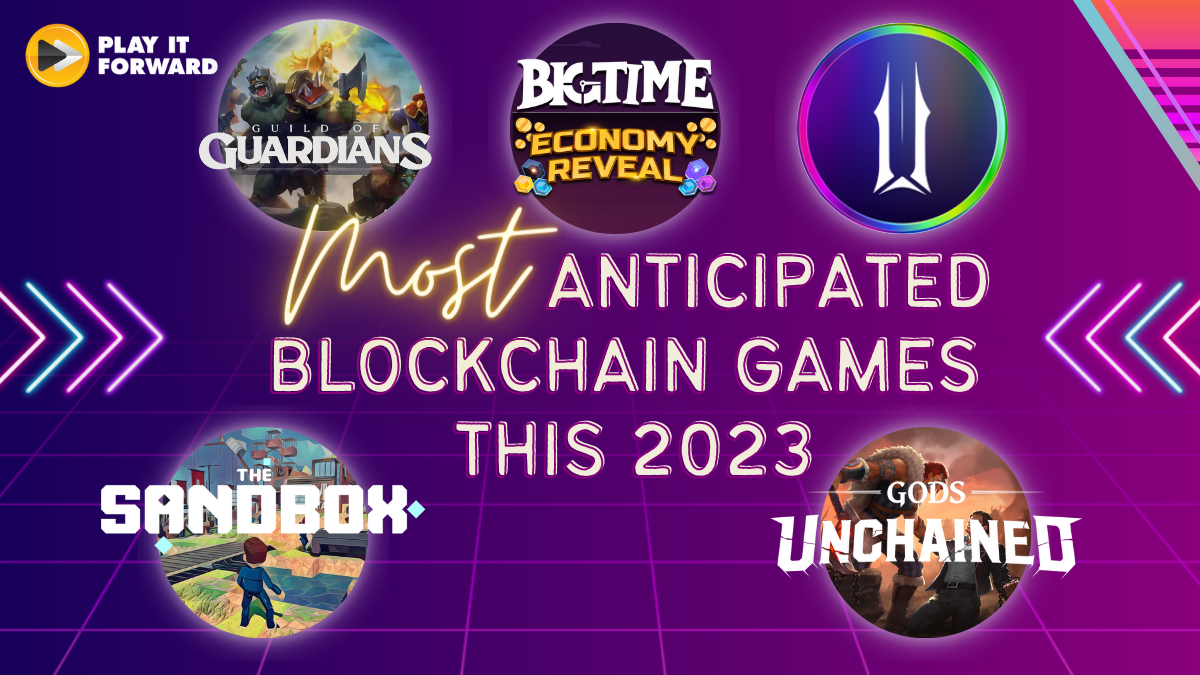 If you’re looking for the best blockchain games, then you’re in for a treat. Blockchain games are now bringing a new level of innovation, security, and ownership to the table. We can prove that in this article talking about the growth, challenges, and the future of the blockchain gaming industry.

But what exactly are blockchain games? Simply put, they are games that use blockchain technology to power their virtual worlds and economies. This means that players can earn, trade, and even own unique digital assets that are secured on the blockchain.

So without further ado, let’s dive into the most anticipated blockchain games of 2023. Get ready to be transported to new dimensions and immerse yourself in the thrilling world of blockchain gaming!

Embark on the ultimate gaming adventure with Big Time, a free-to-play, multiplayer action RPG. Here, you will take on a journey as you battle your way through ancient mysteries and futuristic civilizations. Collect NFTs and tokens as you fight enemies, and then use them to produce even more unique in-game items.

But the fun doesn’t stop there. In Big Time, you can also create your own personal metaverse, known as SPACE. You can customize SPACE and invite your friends to hang out online. With the power of procedural generation, you’ll experience a new and exciting adventure in every battle!

The team has an exciting roadmap planned. These includes the launch of personal metaverses, new digital collectibles, player abilities, and the $TIME token. Plus, with future plans in the works for SPACE rentals, guild features, and more, the possibilities are endless.

Big Time is available to all players and won’t require you to pay for additional content. That’s right, you can enjoy endless adventures without breaking the bank!

Guild of Guardians is a multiplayer, fantasy-action RPG that lets you build your team of heroes and earn epic rewards. Here, you’ll take your team of powerful Guardians through challenging dungeons to collect resources and earn experience. Use these resources to craft items or summon heroes, which can be traded for real money on the marketplace.

The game also features a unique P2E economy, where you can earn both NFTs and tokens by playing the game. And with the power of blockchain technology, you’ll have true ownership and control over your in-game assets.

What’s in store for Guild of Guardians this 2023?

The team at Guild of Guardians has an ambitious roadmap planned. This includes the beta mainnet in the first half of the year and its official release in the second half. With the focus on community-driven incentives and accessibility, there’s no limit to the adventures you can have in the game.

Illuvium: Zero Alpha, the newest game from Australia-based blockchain gaming studio Illuvium is now live. The alpha version of Zero is only available to selected 6,500 holders of Illuvium land NFTs.

This isn’t just any ordinary building game. You can develop and manage your industrial complex and extract fuel and sell it on the game’s marketplace. Thus, earning real-world value from your in-game assets.

Zero joins Illuvium’s two existing games, Monster battler Illuvium: Arena and open world Illuvium: Overworld, both currently in beta testing. And by 2023, the company plans to open up its entire universe to the public. Built using Unreal Engine 5 and hosted on ImmutableX’s blockchain, Illuvium is a must-try game this year.

Most popular blockchain games this 2023

Gods Unchained is a leading blockchain-based game that offers players an engaging and competitive experience. It has a collectible card gameplay similar to Hearthstone: Heroes of Warcraft. Built on Immutable X, players can earn and sell NFTs using the core currency $GODS token. The game is free-to-play and has a passionate community of players. It has over 114.4K Twitter followers and more than 86K Discord members.

Gods Unchained has been in development for 4 years since 2018 and its popularity has been growing steadily with more players and sales every month. The game has a well-organized and engaging community on Discord and Twitter, with constant updates of in-game art and events.

The game also organized various events and programs to attract new players and reward loyal players with attractive prizes. The team is also looking to release a mobile version of the game, which will allow them to reach a larger audience worldwide. All of these factors make Gods Unchained one of the most popular blockchain games in 2023.

The Sandbox is a popular blockchain-based game that allows creators to monetize voxel assets and gaming experiences on the blockchain. The game features a metaverse that comprises a map made up of 166,464 LANDS, where LAND owners can host contests, and events, stake SAND to earn and customize assets, vote in the metaverse governance, play games, and more.

The game has a large and active user base, with more than 1 million users. It also has secured partnerships with over 50 popular play-to-earn projects, celebrities such as Snoop Dogg, TV shows like Hell’s Kitchen, and brands like Adidas. The game has a sizable social media following, with 1 million Twitter followers and 300k Discord members.

Splinterlands is a unique collectible card trading game on the Hive blockchain that offers a combination of deck-building and auto-battler gameplay. The game was co-founded in 2018 by Matthew Rosen and Jesse Reich with the goal of creating digital trade cards that are owned by the players, not by companies.

According to DappRadar, in Q2 2022, Splinterlands was the number 1 blockchain game in terms of active users, with an average of 283,000 unique active wallets. The game has a thriving community of active players, which has led to its cards holding a lot of value.

Splinterlands is similar to classic card games like Magic: The Gathering, Hearthstone, and Pokémon, but it is more dynamic and fast-paced, with matches lasting only a couple of minutes. Despite its fast pace, the game still requires a lot of strategy.

Trial Xtreme, one of the most popular bike racing games of all time, is now going to be available on the Web3 platform, thanks to Gameplay Galaxy. With $12.8 million in funding raised, the company promises to deliver an extraordinary P2E gaming experience to its players.

In the Web3 version of Trial Xtreme, players will be able to own their own vehicles, racetracks, characters, workshops, and other items as NFTs that they can buy and sell on a decentralized marketplace. The game is not just about racing, but also about earning active income by winning tournaments and competitions, hosting events and tournaments for others, and even forming guilds to take part in game ownership.

The company plans to use the seed funds to create new and exciting games, onboard Web2 players to its Web3 gaming ecosystem, develop its wallet offering, and expand its development team.

Recently raising a whopping $25 million in a funding round led by Pantera Capital, Revolving Games is poised to take the gaming world by storm with Skyborne Legacy.

Skyborne Legacy is a social world and trading role-playing game that’s set in a fantasy realm filled with mythical creatures, powerful spells, and legendary treasures. Players will be able to build and customize their own Skyborne avatars, explore a vast and immersive open world, and battle their way to the top of the leaderboards to earn epic rewards.

Players will be able to trade valuable in-game items and digital collectibles, as well as own and manage their own virtual lands, creating their own personal metaverse inside the Skyborne universe. The game will be fully decentralized, running on the Polygon blockchain.

Skyweaver is soaring to new heights in the world of blockchain gaming as it recently raised an impressive $40 million in Series A funding. Leading the round were industry heavyweights Brevan Howard Digital and Morgan Creek Digital, with additional support from well-known names like Polygon, Take-Two Interactive, and Ubisoft.

But what exactly is Skyweaver, and why is it generating so much buzz? Simply put, it’s a turn-based card game that allows players to battle each other and earn tokenized cards to trade on the marketplace. The game, which is built on the Polygon network, was launched in February 2022 after a successful private beta where over 3 million games were played and 345,000 people signed up for the waitlist.

With the funding from the Series A round, the game developer, Horizon, plans to invest in Web3 products and scale its operations. This includes growing its developer stack and smart wallet Sequence, expanding the content and reach of Skyweaver, and introducing the semi-fungible token (SFT) marketplace Niftyswap.

With $40 million in funding and a talented team behind them, Skyweaver is definitely worth keeping an eye on as we head into 2023!